US-based RAND Corporation published a report which outlines Russian media’s encroachments in Turkey’s political and economic sphere. As such, the report underscores that Russian media has contributed in enhancing anti-American discourse within the country and have further reinforced the Turkish government’s stance in that respect. The report indicates the use by Russia of media outlets and information strategies in order to pursue specific foreign policy goals regarding Turkey.

It further stresses that these strategies go in correlation with a policy of undermining NATO and contributing in suspicion between Turkey and its Western allies.

More: Russia’s Use of Media and Information Operations in Turkey 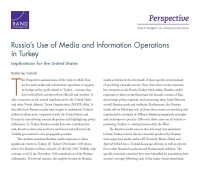