CHP News: I will win in first round: CHP’s candidate İnce 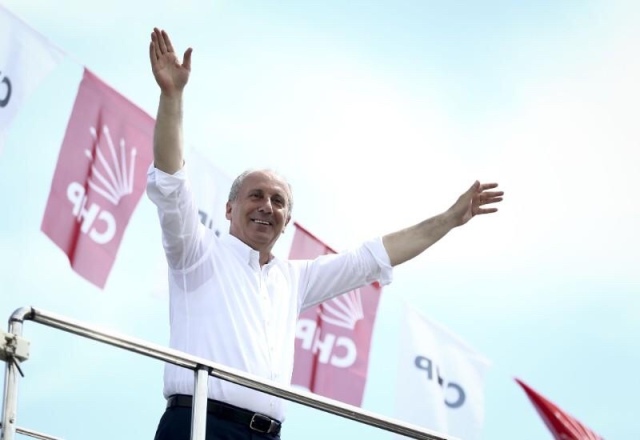 Main opposition CHP presidential candidate Muharrem İnce said he anticipates to win in the first round of presidential elections.

“At first, I was counting on carrying the presidential race to the second round. But now, everything has changed. Now, we will win in the first round,” İnce said at Ankara’s Eryaman neighborhood on June 5.

The CHP candidate has visited several districts in Ankara as a part of the presidential campaign and praised the reactions from participants in the cities he held rallies.

“I have been engaged in politics for 30 years, I have never seen such a spirit of change,” he said.

The CHP was founded on 9 September 1923, about one and half month before the proclamation of the Republic of Turkey. The first President of modern Turkey’s oldest party was M. Kemal Atatürk. Today CHP is a social-democratic party, member of the Socialist International and associate member of the Socialist Group at the European Parliament. The scope of the CHP bureau in Brussels is not limited to the bilateral framework of Turkey's EU accession process. Issues such as the information society, energy policies, social development, climate change, international trade and security are among the different focus areas. The EU-Turkey relations are about integration and need multiple, plural and horizontal channels of communication. The CHP supports and promotes Turkey's EU membership process also by being more present and active in Brussels The CHP's Representative to the EU is Ms Kader Sevinç who previously worked as an MEP advisor at the European Parliament and in the private sector.
View all posts by CHP EU Representation →
Gallery | This entry was posted in CHP News and tagged chp, Hurriyet, Hurriyet Daily News. Bookmark the permalink.