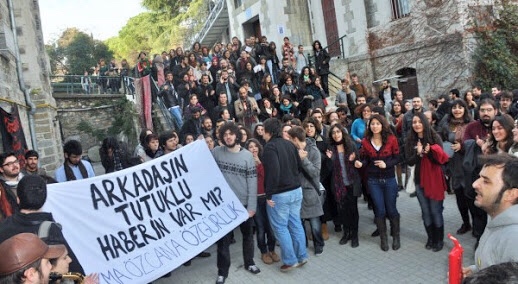 Nine imprisoned students from Boğaziçi University have penned a letter.

Mentioning the prison conditions in the letter, the students have said that the support put behind by their friends has liberated them.

On March 19 a group of students opened a stand giving out Turkish delight in North Campus following 46 soldiers losing their lives in Afrin. A group of antiwar students protested them by opening a banner reading “Invasion, massacre cannot be marked with Turkish delight”. A quarrel sparked between the two groups and the stand was reportedly attacked.

On March 24, Saturday, Erdoğan said, “Those communist, traitor terrorist youngsters scattered the desk. We will not grant those youngsters right to education at university.”

Following his statements the police raided the dormitories and houses of the students. After the raids, in total sixteen Boğaziçi University students were taken into custody.

The CHP was founded on 9 September 1923, about one and half month before the proclamation of the Republic of Turkey. The first President of modern Turkey’s oldest party was M. Kemal Atatürk. Today CHP is a social-democratic party, member of the Socialist International and associate member of the Socialist Group at the European Parliament. The scope of the CHP bureau in Brussels is not limited to the bilateral framework of Turkey's EU accession process. Issues such as the information society, energy policies, social development, climate change, international trade and security are among the different focus areas. The EU-Turkey relations are about integration and need multiple, plural and horizontal channels of communication. The CHP supports and promotes Turkey's EU membership process also by being more present and active in Brussels The CHP's Representative to the EU is Ms Kader Sevinç who previously worked as an MEP advisor at the European Parliament and in the private sector.
View all posts by CHP EU Representation →
This entry was posted in Bianet and tagged Bianet. Bookmark the permalink.