The leader of the main opposition CHP, Kemal Kılıçdaroğlu, has announced the “Taksim Declaration” in a rally organized (by the CHP) to protest the July 15 failed coup attempt. Kılıçdaroğlu read the declaration, which includes articles on democracy, rights and governance, in the event titled “Republic and Democracy Rally.”

The articles of the declaration read on July 24 are as follows:

1. The coup attempt of 15 July targeted our parliamentary democracy. Although the Turkish Grand National Assembly was under bombardment, it continued to perform its duties and managed to repel the coup. We condemn and denounce the perpetrators, their supporters in the country and, if there are any, abroad.

2. All political parties have strongly opposed to the coup attempt and they were indisputably unified around a “common understanding” of democracy in Turkey. This common understanding and attitude has to pave the way to the consolidation of a culture of reconciliation in politics.

3. It is the true duty of all democrats and everybody who is committed to democracy to oppose all kinds of coups and custodianship on parliamentary system. We should all join to say loudly, “no coup, no dictatorship, but democracy.”

4. The recent coup attempt against our parliamentary democracy received an additional meaning and dimension as our people used their “right to resist.” As a result, the right to resist emerged as a legitimate instrument of preserving democracy.

6. The coup attempt has also again demonstrated that the principle of “separation of powers” is the safeguard for the use of checks and balances in a democracy, which constitutionally envisages the separation of “the legislature, the executive and the judiciary.”

7. The restitution of the rights and reputation of people who suffered from the “Sledgehammer,” “Ergenekon” and “Military espionage” cases should inevitably be on the agenda of all political parties.

8. The coup attempt has clearly proven that governing a state should rest on competence. In structuring the state, instead of political partisanship, kinship, religious solidarity and sectarianism, qualifications such as knowledge, intellectual capacity and background experience should be the fundamental criteria. We should bury in history the understanding of “usurping the state” rather than “governing the state.” In this respect, restructuring the state is a must.

9. The good people of this country, whatever their beliefs, identity and lifestyle, should freely be able to walk the streets, avenues, squares and parks of this country. We should not forget that the July 15 coup attempt was the product of a third-class democracy. Our people are worthy of a free and full democracy and they do not deserve to be subjected to a third-class governance. Turkey should be completely purified from the rule of putschists.

10. The state should not be governed by anger and revenge. The culprits of the putsch should be tried lawfully with an understanding of abiding by the rule of law. This is a prime requirement for the state’s integrity and dignity. Torture, ill treatment, oppression, intimidation would only bring the state down to the level of the coup plotters themselves. This should not be allowed. 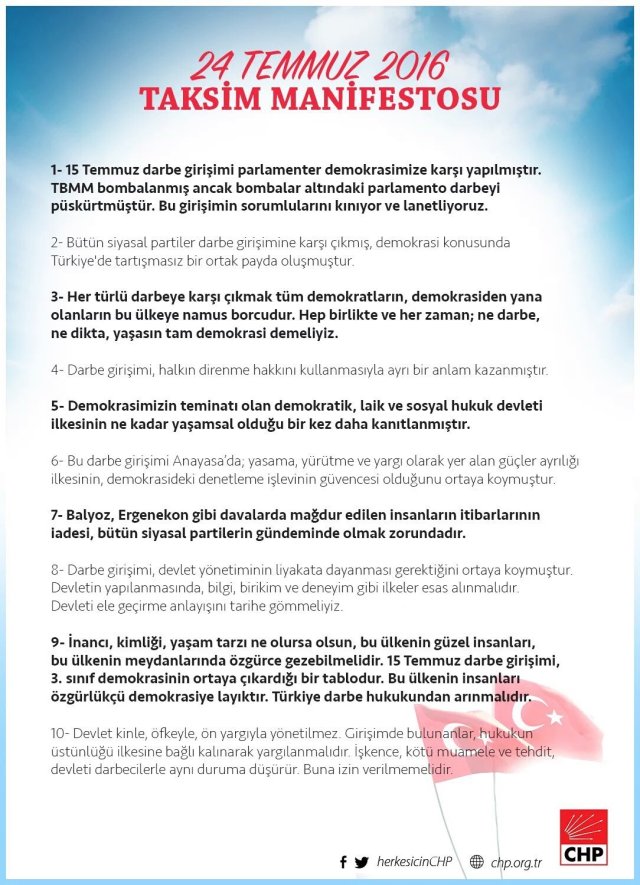