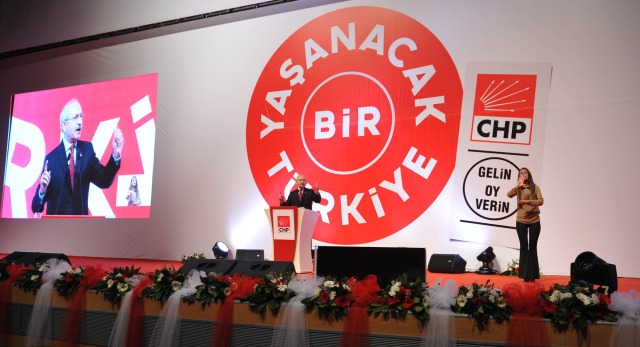 “This is not just an election manifesto. Today we are announcing a comprehensive document of a vision that no party has ever been able to draft for Turkey and its future” CHP Leader Kılıçdaroğlu said in his party’s election campaign launch in İstanbul on April 19, using the election slogan “Milletçe Akışlıyoruz” (We Applaud as a Nation).

“We know the situation of citizens – tradesmen, farmers and public servants – who are deep in debt. Turkey is unable to achieve growth or development. Wealth is not distributed in a just way. We have to rescue Turkey from the middle income trap. We have six significant projects that are attractive but will also directly solve citizens’ problems. We will tell our local branches to ‘just explain these six projects. Among these projects are two extra wages to be paid to pensioners and erasing 80% the past-due interest payments for people with credit card debts” said CHP Leader Kılıçdaroğlu, noting that nearly 5 million Turkish citizens had become indebted to banks in recent years.

Economic growth fell to 2.9 percent in 2014 from 4.2 a year earlier and the lira is down 12 percent versus the dollar this year. “Some 89,000 people have been imprisoned because they could not pay their debts, while 430,000 are at risk of being jailed just because of it. That’s why I criticize the government for turning the country into an open-air prison” said Kılıçdaroğlu. Bearing the slogan “a livable Turkey” the manifesto is divided into seven sections covering multiple topics from democracy and rule of law to public services, progress towards a knowledge economy to environment sustainability.

CHP Leader Kemal Kılıçdaroğlu pledged to strengthen the parliamentary system, saying the government had undermined the separation of powers, media freedom and EU candidate Turkey’s foreign relations.  “We will continue on our path, strengthening our parliamentary experience” he said. 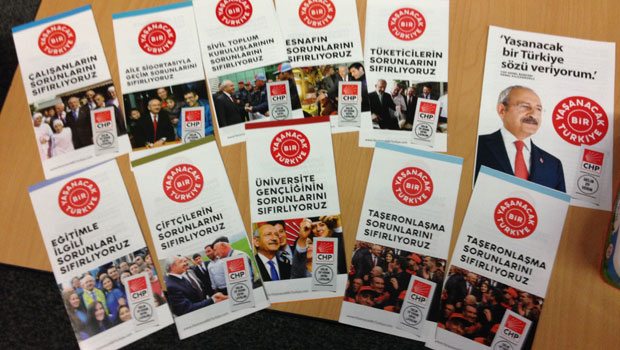 Highlights from the CHP election manifesto:

– Thanks to a family insurance system the CHP will introduce, there will be no family earning less than 720 Turkish Liras a month. The minimum wage would also not be less than 1,500 liras, representing a 50 percent hike from its current amount. The amount of social aid granted to poor families will be doubled compared with that of today. A total of 16.7 million people and 3.5 million households would benefit from the aid, while women with small children would be granted TL 400 ($149) to cover nursery bills.

– We will increase the minimum wage and the minimum salary a retiree gets — currently TL 949 ($354) – by 58 percent to TL 1,500 ($560). We will grant retirees two one-month pension bonuses ahead of the holy month of Ramadan and the Eid al-Adha religious holiday.

– We promise to allow every family to own an apartment or to end high rents through a system in which families will pay only 277 liras a month for a 70-square-meter apartment.

– We promise to create employment for 1 million Turks through economic policies that envisage that creation of more jobs at a moment when official figures suggest more than 11 percent of the country is unemployed.

– Income tax rates will be diversified; everyone will be taxed according to their income

– The Higher Education Board (YÖK), established following a 1980 coup will be abolished as a step to further liberalize universities.

–  We will reduce the 10-percent election threshold to 5 percent.

– We will stop illegal spying and surveillance activities of the intelligence, police and telecommunication authorities to put an end to “intimidation” of the civil society

– We will turn Turkey into a strong European democracy in compliance with the EU norms and principles of the European Convention on Human Rights.

– We will introduce legislation to curtail arbitrary and excessive use of force and tear gas by the law enforcement.

– We will bring Turkish laws regulating Internet into line with international agreements it signed.

– A new constitution to be based on social and parliamentary consensus is a necessity to expand freedoms, strengthen the democracy and build social peace.

– An oversight commission in Parliament to be headed by the main opposition party will be established and tasked with scrutinizing the government conduct.

– Restructuring of juvenile courts and juvenile convictions, along with an end to juvenile arrests

– The Supreme Board of Judges and Prosecutors (HSYK) will be divided into two boards, one for judges and the other for prosecutors, both given equal budgets

– An end to legislative riders by outright banning omnibus bills

– Executive orders will not carry the weight of laws

– The CHP will seriously deal with the Kurdish question. We will establish a national inter-party commission to carry out the peace process. The right address for the resolution of the problem is the parliament. It is the CHP that can resolve this question because it’s the most courageous and honest party when it comes to resolving the Kurdish issue.

– Official legal status will be granted to cemevis, the houses of worship for Turkey’s Alevi minority

– An end to mandatory religious education classes in schools

– Cancelling the construction of the Akkuyu Nuclear Power Plant

– The 3rd Bosphorus Bridge, the North Marmara Highway and the 3rd Istanbul Airport projects will be reevaluated.

Yes we can: Four-legged realization strategy

Introducing a four-legged strategy for the realization of his promise, Kılıçdaroğlu said the first section was to ensure Turkey becomes one of the top 20 countries on the Human Development Index. “Our current rank is 69. Our objective is to move Turkey forward and to place it among the first 20 countries. Can we make it? Yes, we can,” he said.

The second leg of the strategy is to implement numerous measures to turn the country into a competitive economic actor by exiting the “middle income and middle technology trap”. “We need to develop a value-added industry based on technology production. To do so, we need to create an ‘information society.’ CHP Leader Kılıçdaroğlu said.

The third leg of the CHP strategy is to reinforce a constitutional principle of the “social state” to provide a fair distribution of the national wealth that has been severely damaged over the 13-year rule of current government. “They have implemented a very remorseless growth policy. Some people hit the jackpot while the number of the poor climbed. Let me give you a figure. In 2002, Turkey’s richest 1 percent grabbed 39 percent of the national wealth. This became 54 percent in 2014. This explains how we now have 17 million poor in the country. They have not opted to end poverty but manage it. They have turned the poor into their grassroots. But I promise there will be no poverty in Turkey at the end of four years of our rule”

The fourth leg is to establish a strong state with strong institutions free from the interventions of politics. “It’s not enough to establish democracy. It should be rooted. For this, the governments will not intervene into the affairs of independent institutions like the Central Bank and others.”

Kılıçdaroğlu also announced a “to-do list” for the first 100 days and 12 months of a CHP government.

The CHP was founded on 9 September 1923, about one and half month before the proclamation of the Republic of Turkey. The first President of modern Turkey’s oldest party was M. Kemal Atatürk. Today CHP is a social-democratic party, member of the Socialist International and associate member of the Socialist Group at the European Parliament. The scope of the CHP bureau in Brussels is not limited to the bilateral framework of Turkey's EU accession process. Issues such as the information society, energy policies, social development, climate change, international trade and security are among the different focus areas. The EU-Turkey relations are about integration and need multiple, plural and horizontal channels of communication. The CHP supports and promotes Turkey's EU membership process also by being more present and active in Brussels The CHP's Representative to the EU is Ms Kader Sevinç who previously worked as an MEP advisor at the European Parliament and in the private sector.
View all posts by CHP EU Representation →
This entry was posted in Uncategorized and tagged 2015 elections, chp, CHP manifesto, economy, turkey. Bookmark the permalink.