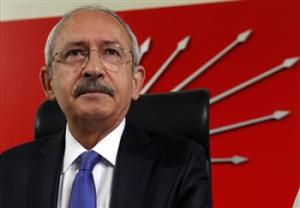 The ruling Justice and Development Party (AKP) is running away from compromise on Turkey’s new charter bid, main opposition leader Kemal Kılıçdaroğlu said May 4, accusing Prime Minister Recep Tayyip Erdoğan of leading Turkey toward an authoritarian rule. “[AKP] said ‘We will make a charter that protects freedom, reinforces democracy’ accusing us of not coming to the [negotiation] table. We are here. Why are you seeking ways of running away,” Kılıçdaroğlu said during a Republican People’s Party’s (CHP) regular assembly meeting in Ankara. “Those who escape from that table will have to give account,” he added.

Kılıçdaroğlu, who had already referred to Erdoğan as a “post-modern dictator,” denounced once again dictatorial ways of subordinating both legislative and judiciary powers. “The one who pretends to be an apostle of democracy, our new dictator who says ‘we are bringing an advanced democracy’ used to say ‘the day will come when the separation of powers will become an impediment.’ How can someone who sees judiciary and legislative powers as an impediment be the prime minister in 21st century Turkey?” he asked.

The CHP leader argued that the May Day events showed a clear drift toward authoritarianism. “It did not start on May Day. First they conquered the judiciary, the independent justice has been removed. Then, by the means of courts provided with special powers, they sent students, intellectuals, writers, generals and academics to Silivri concentration camp without giving them the right to defend themselves. They used the judiciary to install their domination,” he said adding that 4,000 militant prosecutors and judges had entered the judiciary ranks during AKP’s government.

“The independence of the judiciary has come to such a point that the prosecutors launch an investigation the day after Erdoğan gives the instruction.”

The CHP was founded on 9 September 1923, about one and half month before the proclamation of the Republic of Turkey. The first President of modern Turkey’s oldest party was M. Kemal Atatürk. Today CHP is a social-democratic party, member of the Socialist International and associate member of the Socialist Group at the European Parliament. The scope of the CHP bureau in Brussels is not limited to the bilateral framework of Turkey's EU accession process. Issues such as the information society, energy policies, social development, climate change, international trade and security are among the different focus areas. The EU-Turkey relations are about integration and need multiple, plural and horizontal channels of communication. The CHP supports and promotes Turkey's EU membership process also by being more present and active in Brussels The CHP's Representative to the EU is Ms Kader Sevinç who previously worked as an MEP advisor at the European Parliament and in the private sector.
View all posts by CHP EU Representation →
This entry was posted in Uncategorized and tagged chp, democracy in turkey, EU, europe, kemal kilicdaroglu. Bookmark the permalink.