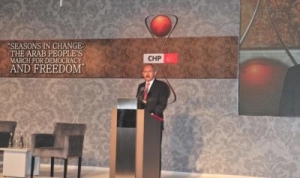 CHP is proving once again that neither the Arab Spring, nor Turkish foreign policy can be trusted to the AKP administration alone.  The opposition needs to be present at each important foreign policy decision to make sure national interests are … Continue reading → 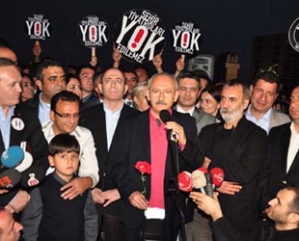 On 29 April CHP chairman Kilicdaroglu joined a protest by actors and artist to stop the impending privatization of the publicly funded theaters. “In a recent play inTurkey, two actors wore trench coats in their role as assassins posing as … Continue reading →

Chairman Kilicdaroglu visited war-torn Balkan state of Bosnia-Herzegovina, where he made very important statements regarding CHP’s foreign policy.  As usual, journalists were also curious about Kilicdaroglu’s views on domestic topics.  CHP Kilicdaroglu emphasized the evolution in CHP: “During a visit … Continue reading →

Kilicdaroglu Calls for a Stop to the Bloodshed

Main opposition Republican People’s Party (CHP) leader Kemal Kilicdaroglu paid a visit to the Istanbul home of the family of a soldier who was killed recently in the southeast, and said the bloodshed must be stopped. “The martyr’s mother said …Continue reading →

FARUK LOGOGLU With the winds of change sweeping the region, the Kurds of Turkey, Iran, Iraq and Syria are coalescing into an interconnected collectivity. Today the Kurdish issue is not a disparate issue of the separate countries where they live, … Continue reading →