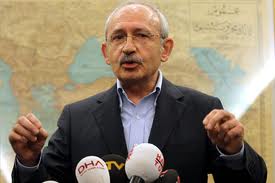 Contrary to the by-laws of the Parliament, AKP snuck a rider to the Education Reform bill that exempts up to US$20 billion of tenders under the aegis of Fatih Project, an ambitious project to give each school student a free PC tablet.  Kilicdaroglu claimed the exemptions will pave the way to the greatest embezzlement disasters in the Turkish history:

A provision in the bill would effectively exempt the so-called FATİH project, under which the government would buy millions of tablet PCs, from the Public Tenders Law, Kılıçdaroğlu said speaking in İzmir yesterday. The amendment to explicitly mention Quranic studies as an elective course was designed deliberately to divert attention from that clause, he claimed.

“They are covering up a theft of $20 billion dollars and to do so they are using our holy book, the Quran, as a tool. Why is a tender worth $20 billion being included in this bill and not in the Public Tenders Law? And when we raise objections to it, Tayyip Erdoğan will say that we are against the Quran,” Kılıçdaroğlu said.